Researching the right broadband deal can be a minefield of confusing terminology. If you’re unsure of the type of service you need or if you’re receiving the speeds your home or business demands, fear not… We’re here to help you cut through the smoke and smash the mirrors.

How is broadband speed measured?

Broadband speed is traditionally measured in Megabits per second or Mb/s. Much like the mph on a car, the higher the Mb/s, the faster your data travels. If we’re talking Gb/s or Gigabits per second… that’s over 1000Mb/s and really, really fast – more on this later.

How do I know what speed I’m getting?

Firstly, let’s be honest, not all broadband packages are created equally. The speed you pay for and the service you enjoy are not always the same, unfortunately creating a sense of mistrust between consumers and ISPs (Internet Service Providers). Thankfully, industry regulators like Ofcom are helping to make this transparent, and speed test tools like Ookla can quickly give you reliable stats on internet performance. Click here to run a speed test. 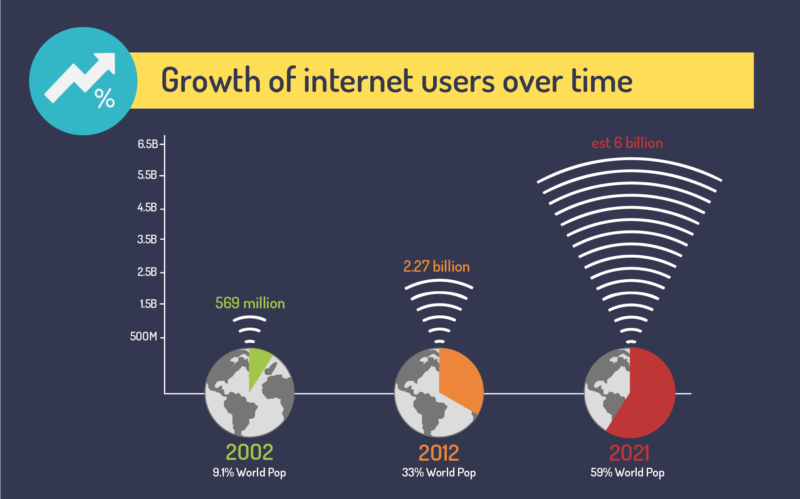 A brief history of broadband in the UK

When standard broadband was first introduced to the UK, download speeds offered to the public were a mere 512Kb/s, that’s just half a Megabit of data per second. Back then those speeds were ideal for our internet habits – sending emails, instant messaging, or updating your top 5 friends on Myspace… no problem.

In 2005, video streaming was made popular by a new site called YouTube. Businesses were reaping the productivity benefits of faster communications. Suddenly, we needed our home networks to handle much more data. Watching cat videos, illegally downloading music files, and uploading hundreds of holiday photos to Facebook, demanded better performance, and by 2009 over 50% of homes in the UK were using broadband.

In response, BT was required to open their network to rival operators in the UK, and new ISPs like Sky and Virgin could begin offering competitive broadband services. Eventually, the increased adoption of the internet meant music was downloaded rather than bought, and online shopping really took off.

Shortly after, the ADSL copper network in our streets had it’s first major upgrade and Fibre To The Cabinet (FTTC) created superfast broadband. Around 2010, comparatively “faster” megabit broadband connections, reaching download speeds of 2-8 Mb/s, became the norm, enabling data to move 10 times faster than ever before. By 2012, internet usage had risen from 9% to 33% for the world’s population, in only 10 years.

Fast-forward to the present day and the demand for speed has continued to grow at pace. The infrastructure has been evolving to keep up. Superfast, ultrafast, and hyperfast broadband are all available options. So, what’s the difference? 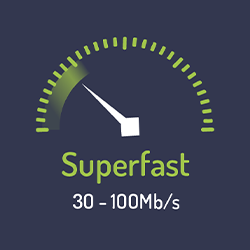 What is superfast broadband?

Superfast broadband is a name typically used to describe speeds anywhere between 30Mb/s and 100Mb/s. This is suitable for making video calls, using streaming tv services (All4, iPlayer, etc), or keeping up with the number of smart devices in a small family household. While many UK homes now subscribe to this as the standard, the variation in speeds offered for these “superfast” packages are, if you’ll pardon the pun…broad to say the least.

For example, the time to download a 5GB HD movie varies significantly, even though your package may not.

Historically, the first “superfast” speed gains were achieved via the introduction of newer fibre cabling leading into the exchange (via those little green cabinets on your street) but the same old copper wiring taking it from the cabinet to your home.

Also referred to as FTTC or Fibre To The Cabinet broadband. FTTC means the cabling to your local cabinet is the faster fibre-optic kind, however, the cabling from the cabinet to your home is still copper. This is not full fibre – but it’s faster by comparison. 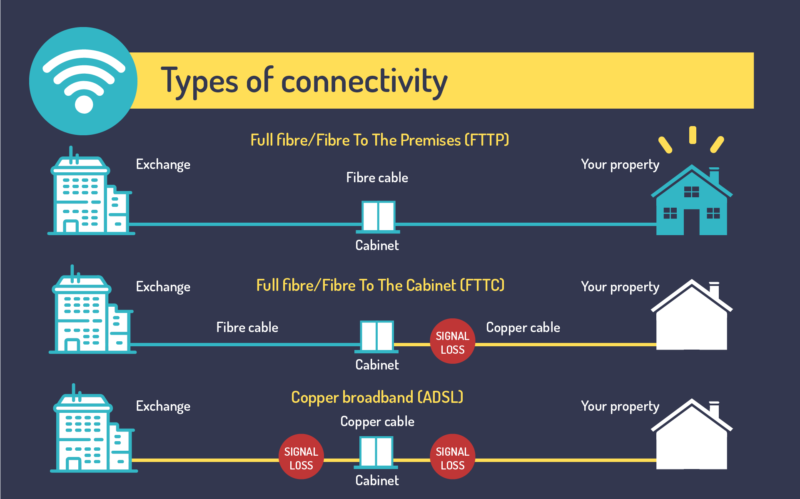 Why the signal loss?

All data signals degrade over a range, but fibre offers significantly better signal durability. Over distances greater than 100 meters, Fibre only loses 3% of the signal compared to copper’s 94% loss of signal. 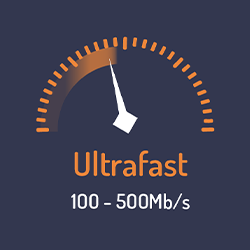 What is ultrafast broadband?

Ultrafast is the next step up for the more data-hungry households. Offering speeds of 100 – 500Mb/s, ultrafast packages cater well to homes running multiple smart devices. They unlock vastly improved video streaming quality like 4K and UHD. Online gaming can be enjoyed with no lag. Newer data-rich files like PlayStation or Xbox games can be downloaded in minutes rather than hours.

Chances are, your place of work will already be running these speeds to keep multiple users online and manage the demands of remote working. The technological difference here is commonly gained by using an alternate coaxial connection to your house i.e, carrying broadband data to your home in the same fashion as cable television and phone. 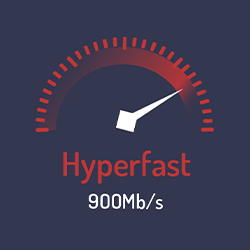 What is hyperfast or gigafast broadband?

Hyperfast broadband (sometimes referred to as gigafast) is where the global demand is taking us next. Getting connected to the ultimate in broadband technology is the perfect way to futureproof your home. Your connection will be able to cope with not only today’s current demands, but the next evolution of internet usage.

In 2020 the global pandemic created record demand for faster and more reliable connectivity. as remote working became a necessity. Faster broadband means more people can be connected at the same time, without it impacting performance. To deliver the absolute best service available to your home, the network in your local area must be upgraded to full fibre. In industry terms, it’s called FTTP or Fibre To The Premises. It means the data flow to your property isn’t slowed down by inferior copper cabling between you and the cabinet. It’s all optimised to best serve the UK’s growing demand.

Full fibre broadband offers the best connectivity available in the UK and the hyperfast speeds on our reliable full fibre are the best around. Check your postcode now and let Giganet connect you to the future of the internet, today.

31st May 2022 How Queen Elizabeth ll has embraced technology

Although the monarchy is known for following tradition, Queen Elizabeth ll has embraced technology throughout ...

With internet connectivity improving across the country, a growing number of UK homes are becoming ...